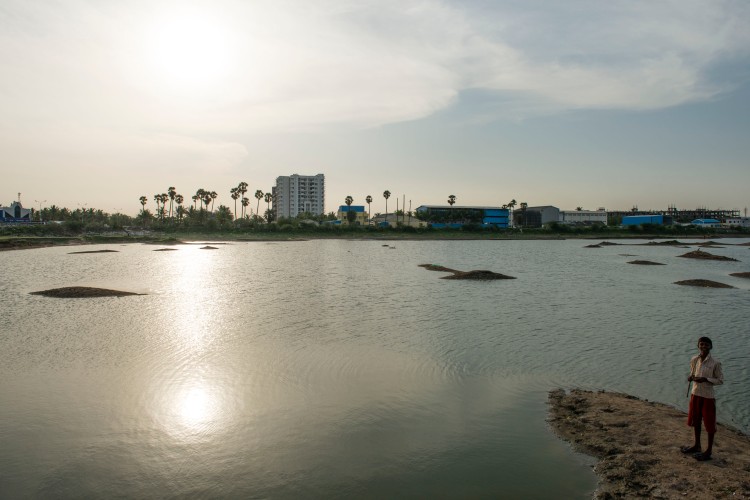 Chennai’s southern suburbs face a unique predicament. In summers, neighbourhoods such as Pallavaram and Keelkattalai suffer from an acute and crippling shortage of water, but come monsoon and they are sinking waist-deep in it! At the centre of this twin-crisis is the problem of the region’s several lakes that have disappeared over the last few decades, or ones such as the Keelkattalai Lake that is on the path to being wiped off the map because of factors such as encroachments, dumping of sewage and solid waste. 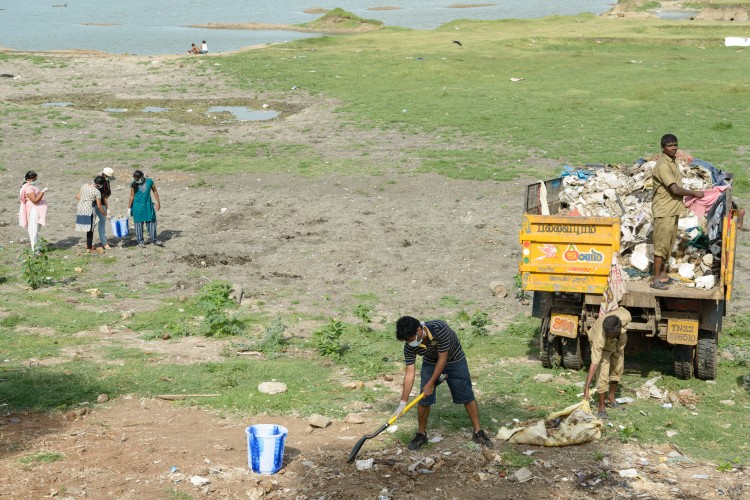 The Keelkattalai lake flanks the Pallavaram-Thoraipakkam Radial Road on both sides between Perumal Nagar and the Eechangadu Signal and covers an approximate area of 16.77 Ha. However, this wasn’t always the case. When the radial road was constructed in 2000, it was decided that it would cut through the Keelkattalai Lake, dividing it in half in the process. The part of the lake north of the Radial Road has shrunk considerably over recent years due to the rapid development of Easwaran Nagar in the north and Perumal Nagar to the northwest. The southern part of the lake, on the other hand, has been the victim of increased dumping of garbage over recent years and has also seen several new industries and factories coming up in its border. The southern part of the lake is of a rectangular shape while the northern half is triangular and tapers towards the northern end. In the nearly two decades since the construction of the radial road, the area surrounding Keelkattalai Lake has undergone rapid development. As of 2014, there were more than 2,500 individual units of housing under construction along the radial road, with many of them in the vicinity of the lake. This has further burdened the lake in terms of increased instances of construction waste and garbage dumping and the dumping of untreated sewage water. Lakes in South Chennai mostly follow a similar pattern when looking at their formation. 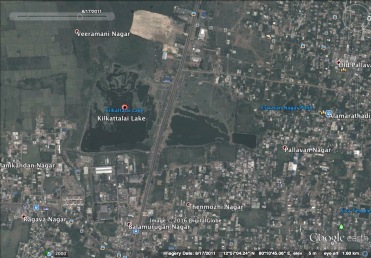 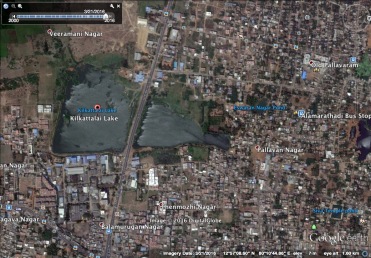 Hydrology
If there was ever a time when the Keelkattalai Lake was used as a source of drinking water, that time is long gone. The major sources of water input in the lake have always been precipitation, groundwater, and water inflow through streams emerging during monsoons, all of which are safe for daily use. However, lakes in this region have been subjected to heavy pollution in the form of dumping of sewage into the lake as a result of the inadequate capacity of the UGDs or Under drainage system. One look at the statistics will reveal the gravity of this problem – at present, areas coming under the Pallavaram Municipality generate upwards of 1 MLD (Million Litres per Day) of sewage, whereas the installed capacity of the UGD system in the municipality stands at just half that at 0.5 MLD. The lion’s share of the excess sewage invariably makes its way to the lakes in the regions such as the Keelkattalai lake. Another significant component contributing to the pollution of this water source is dumping of garbage and industrial waste from the few factories flanking this lake. Until a few years ago, the dumping of garbage and plastic waste was rampant around the fringes of the lake, however, in recent years the dumping of garbage generated in Pallavaram and neighbouring areas has been shifted to the new Vengadamangalam bio-methanization plant with the capacity of processing over 100 MT of garbage. However, this shift has not meant that a resolution has been found to the problem of existing garbage at the lake, which has resulted in problems in its fringes such as algal blooms. The triangular region between Velachery, Vandalur, and Thoraipakkam falls in an area where excess water from larger lakes to the west of Chennai has historically flowed through towards the sea. A large number of these lakes, therefore, have artificial origins for the purpose of irrigation and were created by stopping this flow of water. However, unchecked development in the recent decades has blocked off most of these inflow channels, leading to two problems where the lakes such as Keelkattalai Lake aren’t fed adequately, while areas that have come up in the path of the water have become prone to excessive flooding. 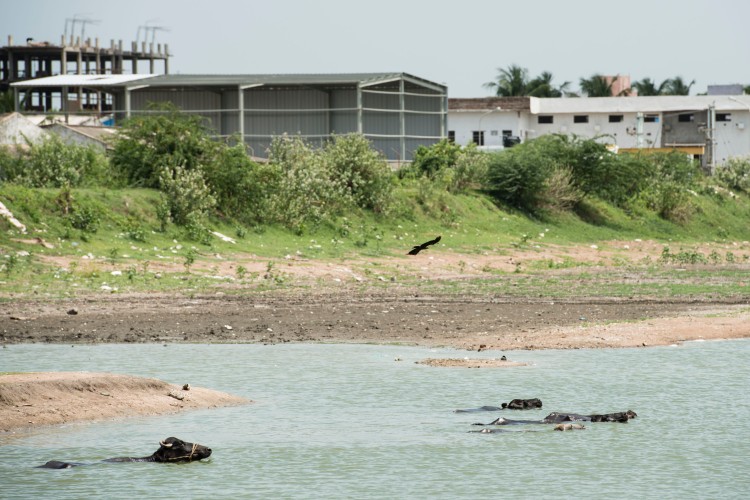 Economy
The economic value of lakes such as the Keelkattalai Lake has often been downplayed and ignored, thanks in part to the decline of agriculture in the area. The artificial lake once played a critical and well-defined role in the agricultural economy of the region, both irrigating lands in the area during summers and also protecting them from flooding during the monsoons. Today, however, Keelkattalai Lake falls smack dab in the middle of one of the most lucrative regions for real estate development, the Pallavaram-Thoraipakkam Radial Road and agriculture is something that has disappeared from practice in the vicinity of the lake since decades. However, that is not to say that the lake has lost its primary economic value and continued to provide the region with essential water supply by replenishing the groundwater table. With the decline of the lake, the water balance of this region faces a dire risk. Borewells feeding off the groundwater are the primary source of non-drinking water for the more than 5,000 new households estimated to come up in the area in the next few years. And according to longtime residents, the groundwater table and the depth at which water is available has declined to unprecedented levels in recent years. Where borewells hit water within just a few feet at one point, now there is no water even at 500 feet at certain places. Large-scale constructions that have more than 100 units of houses have come up in large numbers around the lake and draw large volumes of water for daily use. The accepted calculation for average per capita water usage for communities with a population of fewer than 100,000 residents is between 100-150 litres per day. And according to the 2011 census, the population of Keelkattalai stood at nearly 30,000, meaning that on a usual day the residents require a minimum water supply of approximately 3 MLD. A striking contrast is that even at an average depth of 4 feet, the entire Keelkattalai Lake approximately contains a volume of water that barely touches 150 million litres. With the groundwater table depleting and the Keelkattalai Lake and other such lakes disappearing, the region faces an acute shortage of water in the near future if nothing is done.
Problems and solutions
Apart from the issues already talked about, a major problem plaguing the Keelkattalai Lake is that of encroachments. Not just individual houses and establishments, but entire colonies and neighbourhoods have come up in recent years in parts which were once covered by the lake. Moreover, the construction of the 200-ft Radial Road has increased connectivity in the region and has led to rampant and unchecked development, with dozens of major developers vying for land in the region surrounding the lake. Being an artificial lake, the Keelkattalai Lake isn’t more than a few meters deep at any point, with the outer boundaries being even more shallow. A direct result of this is that the water surface area of the lake fluctuates greatly in relation to the amount of water, and substantially recedes in drought years and summers. It is these receded areas that have almost completely been encroached by constructions.
Thanks to the efforts of activists and the jolt received as a result of the damage done by the 2015 Chennai Floods, the government and authorities are finally turning their attention to fixing these long-standing problems. In a major turn of fortunes for the Keelkattalai, it has been identified under a government project for a gamut of improvements costing nearly Rs. 15 cr. The project has been undertaken by the State Government under the Tamil Nadu Sustainable Urban Development Project with the help of a World Bank loan and will carry out improvement works in the Pallavaram Lake and Keelkattalai Lake. These improvements will include desilting of the lake basin and reinforcing the lake bunds apart from installing sluice valves to take care of excess water. 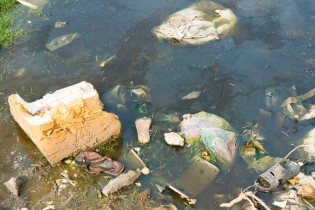 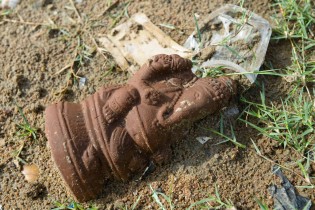 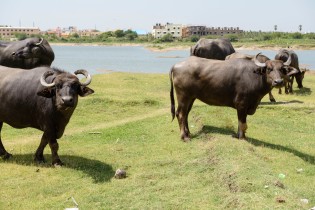 cows on the shore of Kilkattallai Lake 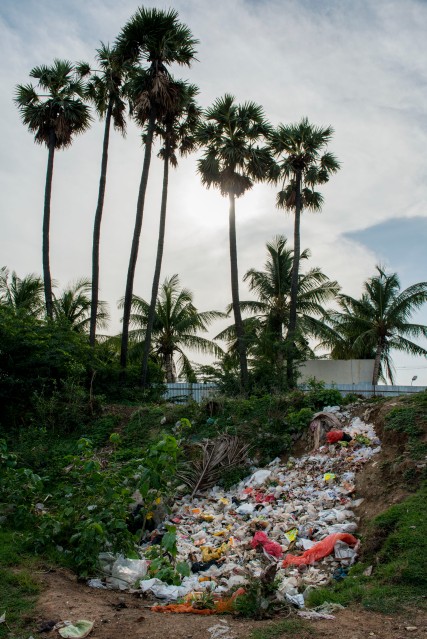 Through the ‘Lakes of India’ blog, E.F.I intends to highlight the plight of several lakes across the country.

You can write and send us your story to communication@indiaenvironment.org and we shall publish your lake story too.  Together let us conserve India’s Lakes.