Theeyambakkam Gandhi Nagar Pond is a small water body measuring an area of 0.71 acres in Madhavaram located at Chennai North. It was a man-made water body with a catchment area of 22 acres surrounded by pristine farmland just 2 decades ago. But over a period of time the catchment area has largely reduced since the farmlands were converted into concrete structures which include residential and industrial buildings.

The pond has also seen a reduction in size when a road was constructed on it. As a result, the water could not drain smoothly into the pond during the rains and the water that was accumulated dried up in a short period of time. 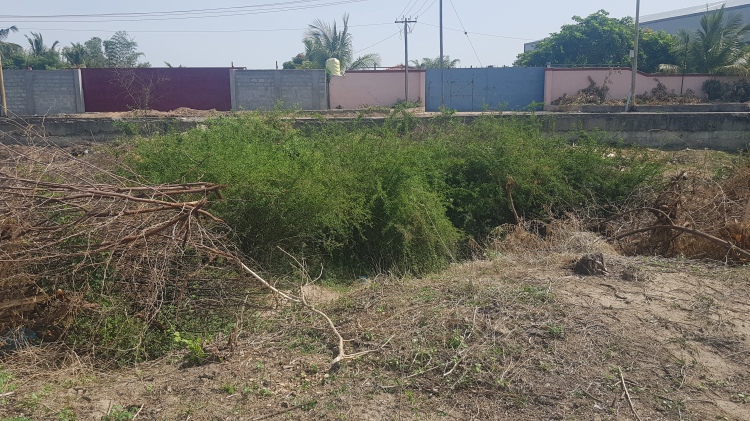 Since there was no water in the pond for a longer duration of time, invasive plants such as the Prosopis Juliflora (Seemai Karuvelam) had started to grow on the peripheries of the pond and on the slopes. The plant is also known to deplete the ground water table & prevent the growth of native plant species. The pond has also seen exploitation in terms of slowly becoming a garbage dump for the local residents around.

Any freshwater body is very vital for the sustainability of all life forms in and around it. Madhavaram is categorised as a “safe” area according to Central Ground Water Board (CGWB) as of 2007 in terms of groundwater stability. But then by the year 2011, the Tamil Nadu Water Supply and Drainage Board (TWAD board) has categorised Madhavaram as ‘semi-critical’. The reason for this is the increase of residential , industrial & commercial buildings that have started replacing agricultural land.

E.F.I’s restoration at the pond was started in the month of July and completed by the first week of August. The restoration was done with great care keeping in mind the ecology of the pond and its surrounding region along with scientific methods of restoration. It is done completely with the collaborative community based conservation efforts. The locals were informed on the restoration and there were given immense knowledge on the conservation of water for the future. Government schools near the pond were also informed and the students were made aware on the importance in the conservation of environment.

Wall paintings were done on the walls right opposite to the lake to give the public a glimpse into the ecological pride of India & Tamilnadu.