The capital city of Madhya Pradesh, Bhopal, is endowed with multiple man-made lakes and is thus referred to as a ‘City of Lakes.’ The Upper Lake (or the Bada Talaab or Bhojtal), located in the west ofl city, has a rich historical significance and serves as a major source of drinking water for the citizens. Along with the Lower Lake, it is identified as Bhoj Wetland of Bhopal as an internationally known Ramsar site declared in 2002 [1].

The Upper Lake is considered the oldest among the man-made lakes of Central India. It was created by Raja Bhoj, a local Paramara king, in the 11th century by creating an earthen dam across the tributary of Betwa river [2]. It is situated at 532 m above sea level,  between  77º 30’–77º 35’ E and 23’ 25”–23’ 26’N. It has a maximum depth and mean depth of 11.7 m and 6m respectively, with a submergence area of 36.5 sqkm . The main inflow of water for the lake is through the Kolans river along with several other drains in its catchment area [3]. 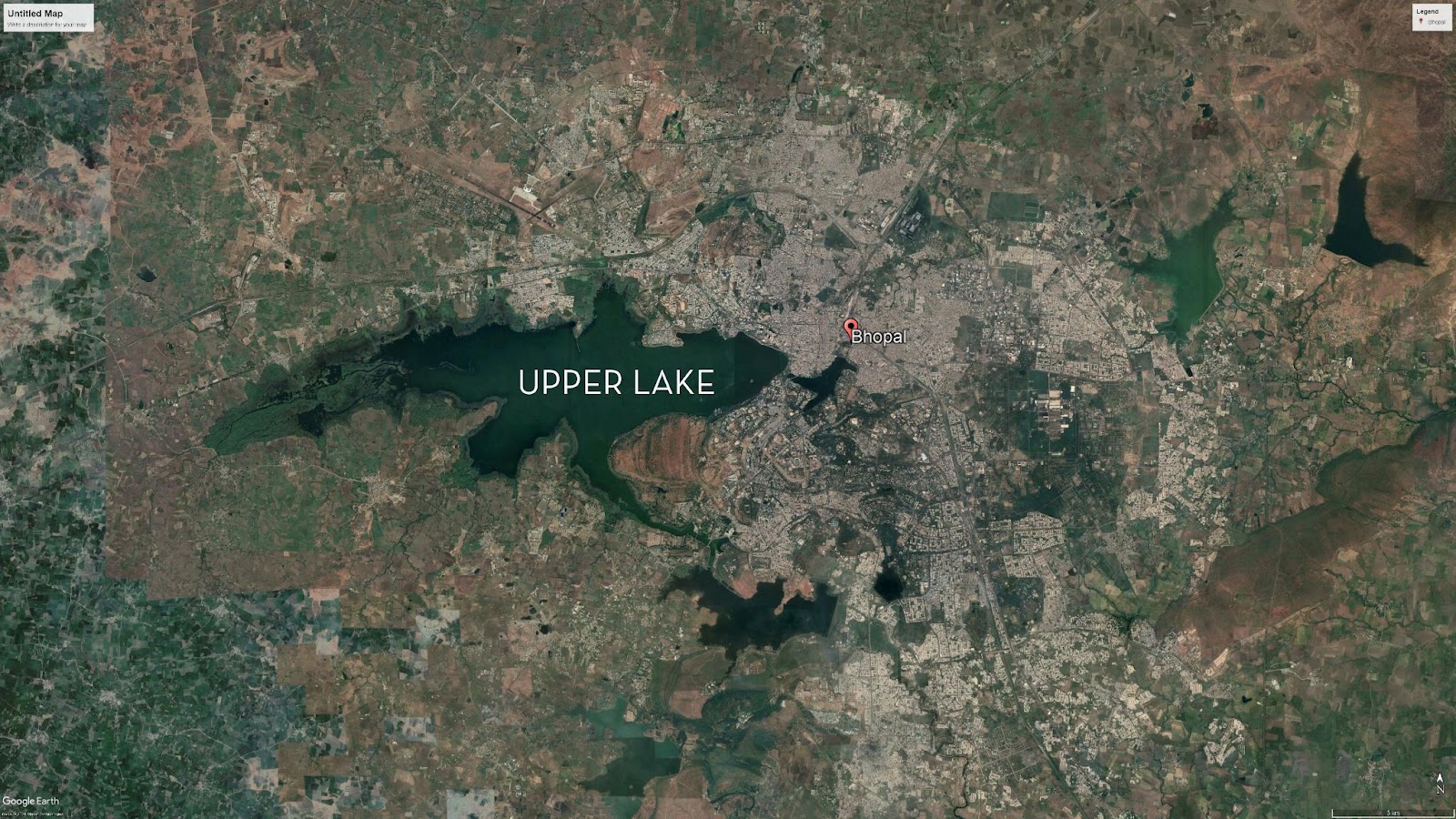 The Upper Lake is significant for the identity of the city of Bhopal and allows multiple functions like recreation, commercial fishing etc. It is inseparable with the social-economical and cultural part of Bhopal and is considered the lifeline of the city. It has played a critical role in the existence and evolution of Bhopal. Before 1947, the water quality of the lake was considered so good that it did not require water treatment [6]. Due to increasing urbanization over the last few decades, the lake has been severely threatened and hence it is constantly within the focus of conservation plans.

From 1995-2004, the Government of Madhya Pradesh implemented the Bhoj Wetland Conservation Project which was directly controlled by the Housing and Environment Department. The financial assistance for this project was given by JBIC (Japan Bank of International Cooperation). With the basic objective of improving the water quality of the lake, the project activities included both preventive and curative measures like increasing the capacity of storage through desilting, de-weeding, construction of sewage treatment plants, catchment area protection etc. Water quality monitoring post-project completion confirmed an improved status of water quality with a 4% increase in water holding capacity of the Upper Lake [6].

After more than a decade, the lake faces new challenges due to increasing demand for real estate development projects, agricultural pressure, anthropogenic stresses etc. It is of paramount importance to constantly keep a check on the condition of the Upper Lake for best possible conservation efforts. The report looks into the properties of the lake, its present state, and the possible scientific solutions for its restoration. 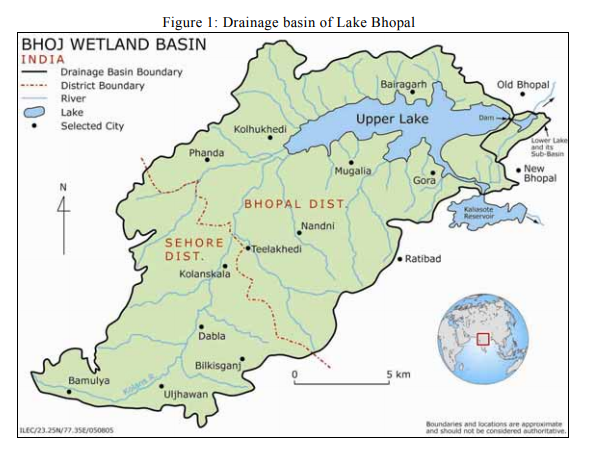 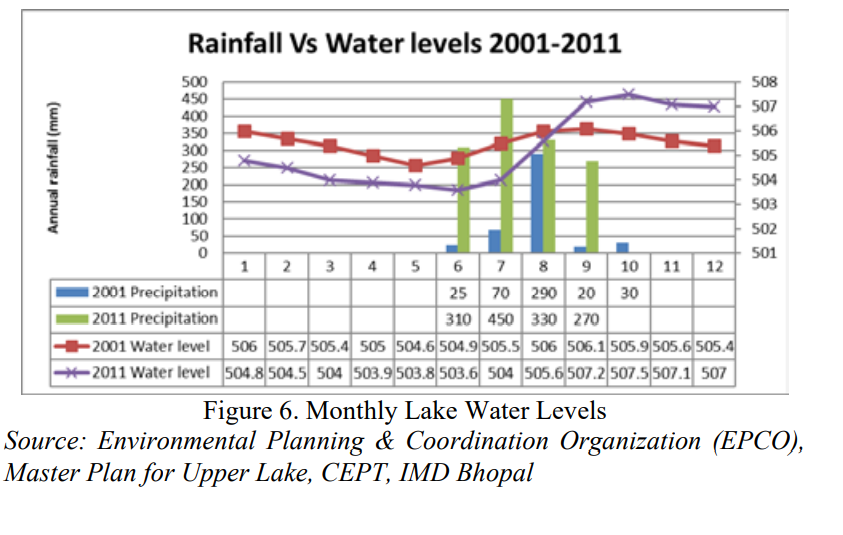 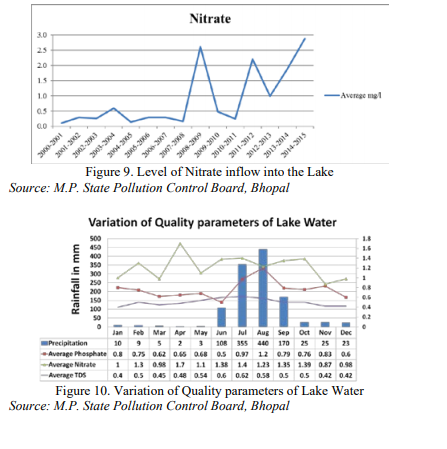 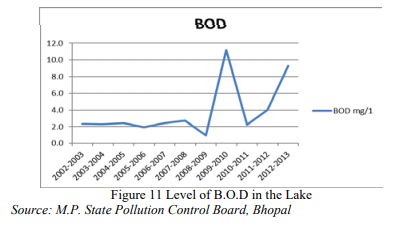 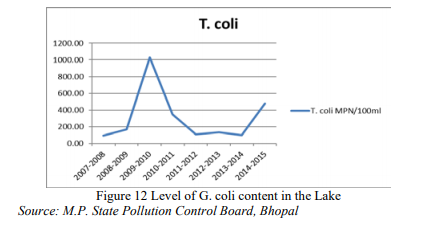 The Upper Lake is used for providing drinking water to more than 40% of the citizens of Bhopal through 8 pumping stations and five water treatment plants. Over nine Sewage Treatment Plants are also established  to minimize addition of raw sewage in the water bodies of Bhopal, but are incapable of running in full capacity. The pressure of urbanization is increasingly affecting the Lake and many specialists and concerned citizens fear for its health and longevity. There are multiple factors that are responsible for degradation of the lake in the last few decades. They are: 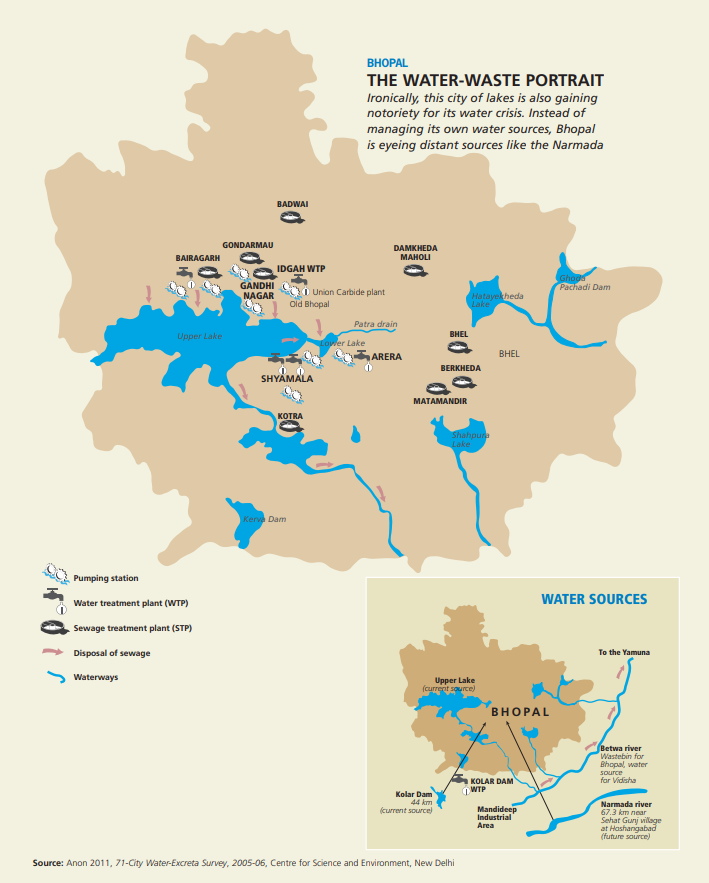 On an optimistic note, citizens and environmentalists are constantly vigilant, and the city has put in multiple efforts to conserve the Upper Lake. In 2009, through a public campaign – Apna sarovar apni dharohar, bada taal sanrakshan abhiyaan, the state government led a movement of manual desilting, by offering shramdaan. The movement received great public attention and was carried out in full force and enthusiasm. The government also removed illegal encroachments and plans public drives for further actions. 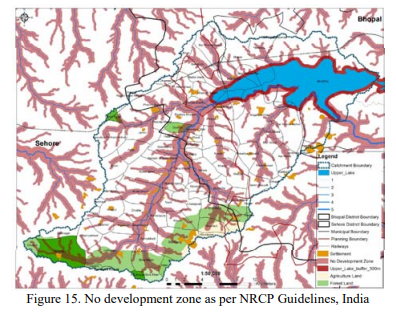 Source:  Manisha, Keerti; Pandey Rama U, ‘ Conserving Catchment Area of Lakes through Development Regulations: A Case of Upper Lake in the City of Bhopal, India

[3] Manisha, Keerti; Pandey Rama U, ‘ Conserving Catchment Area of Lakes through Development Regulations: A Case of Upper Lake in the City of Bhopal, India,’ GSTF Journal of Engineering Technology (JET) Vol.5 No.1, 2018

[4] Manisha, Keerti; Pandey Rama U, ‘ Conserving Catchment Area of Lakes through Development Regulations: A Case of Upper Lake in the City of Bhopal, India,’ GSTF Journal of Engineering Technology (JET) Vol.5 No.1, 2018

[15]Some cities have lost up to 70% of wetlands. Will Bhopal face the same fate? (citizenmatters.in)