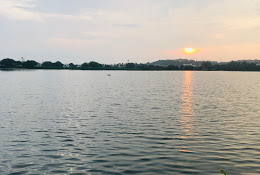 Shahpura Lake is a man-made water body in south Bhopal and was formed in 1974 – 1975 as a part of the Betwa Irrigation Scheme. In the following decades the surrounding village of Chuna Bhatti was urbanized, and hence it is no longer used for irrigation but acts as recreation and waterfront for the residents. The lake was originally constructed using a small stream which carried the overflow from oxidation ponds situated near Ekant Park area of today. But when these oxidation ponds closed in 1977-78, the stream continued to carry storm water and sewage from surrounding settlements. Apart from this the lake also has multiple inflowing drains that continue to bring wastewater to it, thus causing heavy pollution [1]. Shahpura Lake, because of its location with high real estate values and commercial potential has gained major public attention and concerns. Increasing construction, encroachment, reduction of buffer zone along with poor water management is exponentially threatening the health of the lake. The report aims to understand the physicochemical properties of the Shahpura Lake, its present conditions and proposes possible solutions for its conservation.

The features and properties of the lake are as following:

2. Construction and Infrastructure development: The western area of the lake has hillocks from which domestic discharge flows into the lake from natural slopes [4].

3. Encroachment: A minimum setback of 30m from the edge of the lake is prescribed in the Bhopal Master Plan 2005. Some of the submergence areas have been filled for construction from which sewage is directly discharged into the lake [4].

5. Cattle intrusion: Grazing and washing of animals has resulted in erosion and pollution [4].

6. Open Defecation and Solid waste dumping: The northern part of the lake is used by people for open defecation whereas recreational and religious activities in the southwestern and northwestern end has resulted in solid waste dumps around the lakeside [4].

8. Growth of weeds: There has been prolific growth of aquatic weeds and the lake has become eutrophic in nature [4].

9. Improper management of solid waste – Inefficient methods of collection, segregation and deposition along with lack of public awareness has resulted in deterioration of water quality. Street vending in the recreational area also adds to the spread of solid waste, by wind or from animals [1].

A fence of almost 2m height has been constructed to monitor movement around the lake but due to inappropriate design it has been easily cut by people for illegal entry [1]. Lately, the government is facing concerns regarding the status of the lake and what are the measures being taken to conserve it. A Green Panel nominee, appointed by National Green Tribunal, has raised concerns on whether the water body is being considered as a lake or as an oxidation pond. Both cases shall require a scientific approach to avoid damage to groundwater resources and pollution of outflow streams [5]. The NGT, in 2019, also ordered partial demolition of illegal residential construction that lies within 33m from the edge of the lake [6].

Many people in the neighbouring area of Chuna bhatti are dependent on borewells to avail drinking water supply which is getting polluted from seepage of lake and outflow drains that connect it to other major water bodies of the cities [7]. It is of utmost importance to preserve the Shahpura lake through the implementation of various policies that allow application of scientific methods for its conservation. Some of these are:

2. Management of the fringe: Afforestation and creation of buffer zones can be created and the species can be chosen according to the soil type, climatic conditions and water quality [4]. Contour trenching and bunding is required in the western end along MACT hill to counter sedimentation in the lake, along with strategically located gabion structures and silt traps. Rip raping, construction of proper fencing can prevent unauthorized movements and dumping the in the lake fringes [1].

3. Solid Waste Management: Indiscriminate dumping of polythene and other solid waste into open drains can be prevented by strengthening the waste collection and management system of neighborhoods. Screen walls across drains can prevent stagnation of water and control movement of polythene bags. Low cost sanitation units can be constructed for residents of nearby slums [4]. Moreover, public awareness should be generated over this subject with a ban on idol immersion in the lake.

4. Deweeding and Desilting: The lake is in dire need of deweeding and weed control due to growth of macrophytes. Aquaculture can be used that specifically targets them along with manual cleaning using equipment. Since dredging can affect pisciculture in the lake, desilting can be proposed only in a limited area.

5. Aeration of the lake: Floating fountains can increase oxygen level in the lake, to prevent the growth of algae and add aesthetic value to the lake.

6. Implementation of policies: MP Bhumi Vikas Niyam should be amended with integration of environmental assessment policies. Acts like Bhopal Metropolitan Sewerage Act should be framed for the increasing urbanization in the city to control pollution of such lakes. Certain bylaws for the construction and regulation of land around the lake should be strictly monitored by the various urban local bodies. Most importantly, educational drives should be carried out that can benefit the conservation, management and development of the lake